Donations will cover the minimal costs of putting the Tour together - the rest will go to The Refugee Community Kitchen.

Fucking and Silly are both real villages. I have never been to Fucking but I passed through Silly once.

I will be riding the Amazing Wobble Bike which is a type of bicylce contraption - to turn the front wheel left the handle bars are turned to the right, and vice versa. It is Fucking Silly.

During the tour I will remain celibate so when I arrive in Silly I may go back to Fucking.

I will be dressed as a Victorian Circus Gentleman (or possibly as a chicken - to show how folk are living in fear of the other) and will perform street shows en route. The shows will be Fucking Silly.

I will be travelling with an orange monkey puppet called Trumpski. He is Fucking Silly.

The Amazing Wobble Bike is not easy to ride and to raise funds on the trip I will be giving members of the public the chance to try and ride the bike. They will look Fucking Silly.

I will also be seeking sponsorship with all moneys raised going to the Refugee Community Kitchen and Help Refugees which are two brilliant organsiation dedicated to helping refugees. They are not Fucking Silly.

The so called refugee crisis is obviously Fucking Silly: the post imperial European countries have relentlessly interfered in the Middle East for decades - much of the problem is down to us. And the fact that we can afford to continue to bomb various countries, yet we cannot afford to support refugees (even unaccompanied children) is Fuckin Silly.

In this time of rising fascism I feel that it is poignant that I will start the tour in Austria, Hitler's birth country, then pass through Germany where he rose to power, then through France which is enthralled by Marine le Pen who has an outside chance of winning the presidential elections this year. I will end the tour in Belgium which is….famous for chocolate and beer.

The idea is to generate as much publicity and as much sponsorship as possible. I also intend to make a film of my epic journey. I will set up a Facebook page, website, and a Just Giving account. If you are interested in getting on board with me in any way get in touch. We need support vehicles, support riders’ publicity generators and as many friends as possible involved. Anyone who wants to join me on any part of the tour will be 100% welcome - the more the merrier.

Beyond politics and religion, if we could, as reasonable straight thinking compassionate human beings, agree that the following are points are Fucking Silly, we could create a spring board from which to build a different kind of future here on planet Earth.

The corruption of our political system is Fucking Silly.

Most politicians in fact are self serving, greedy, heartless, and Fucking Silly.

Turning this beautiful planet into a wasteland is Fucking Silly.

Spending billions of dollars on space exploration is Fucking Silly.

The rise of the populist right across Europe is Fucking Silly.

The fact that 8 individuals have accrued as much wealth as the poorest 3.5 billion people on this planet is Fucking Silly.

This extreme inequality is Fucking Silly.

Allowing corporations to become so large and so powerful is Fucking Silly.

The fact that the UK government has commited to spending €167 billion (€205 according to CND) on replacing the Trident nuclear submarine programme is mind bogglingly Fucking Silly.

Having weapons in space pointed at our own planet is Fucking Silly.

Persecution of people due to their religion, sexual orientation, or disability is Fucking Silly.

Persecution and denial of rights to indigenous people across the globe is Fucking Silly.

The ownership of the media by a few wealthy individuals is Fucking Silly.

Endlessly seeking happiness and satisfaction through accumulation of possessions is Fucking Silly.

The increasing use of plastic and the consequent pollution of the oceans is Fucking Silly.


Of course all of these things are so much more than silly., but I couldn't find a village called Insanely Outrageous. My next plan is to found the village of Insanely Outrageous and to cycle there on the wobble bike in 2018 if Fucking Silly World War 3 has not broken out by then. 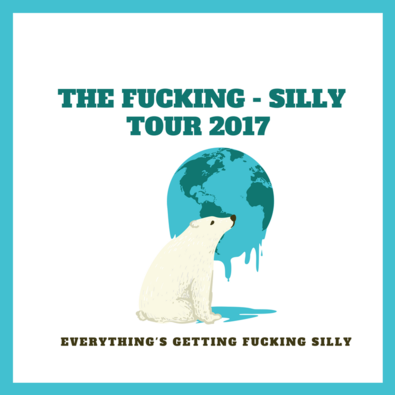